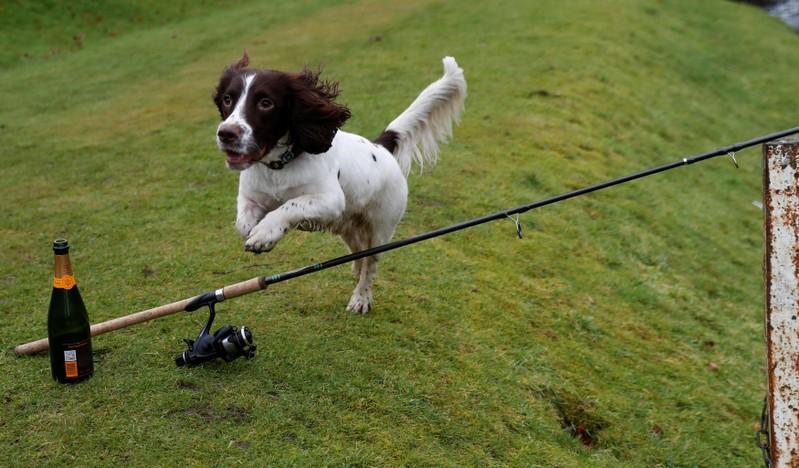 KENMORE, Scotland (Reuters) – On the banks of the River Tay in the Scottish highlands, a parade of pipers and a whisky-based blessing helped mark the start of the country’s salmon fishing season on Monday.

A Springer Spaniel jumps over a fishing rod on the riverbank on the opening day of the salmon fishing season on the River Tay at Kenmore in Scotland, Britain January 15, 2018. REUTERS/Russell Cheyne

The village of Kenmore has been the traditional starting place for the Scottish salmon fishing for over 70 years, with the Tay being the first of the scores of river systems on which the season takes place.

Monday’s event saw dozens of anglers, many sipping glasses of whisky, cast lines in a bid to bag a big fish but, as of late in the afternoon, one participant said that he had seen only one salmon actually caught by anyone – a fact that neither surprised nor bothered him.

“It’s kinda the highlight of the season. You know you’re coming here not really to catch any fish. At the end of the day you’re coming to savor the atmosphere,” fisherman Leigh Kelly, 36, told Reuters.

”If you’re gonna catch a few fish, you need to be nearer the sea to get at any, you know? The estuary here is right at the top of the river, so that’s difficult. But it’s good to be on the bank.”

The event kicked off with a parade by the Vale of Atholl pipe band, who marched the anglers to the river, which was then blessed with the contents of a quaich – a traditional drinking vessel – of whisky being thrown into the river.

Writing by Mark Hanrahan in London Editing by Jeremy Gaunt