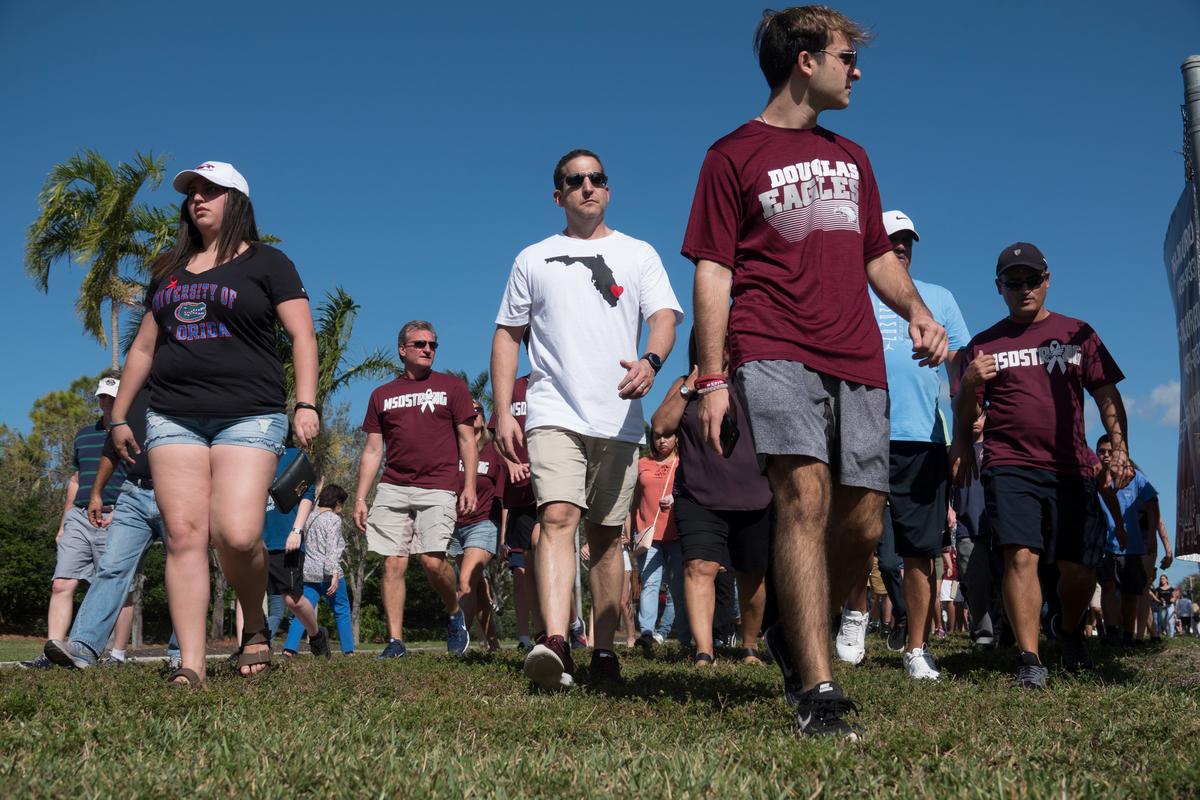 The mood was subdued as roughly 3,000 teenagers walked past hundreds of uniformed police officers to resume classes at the school in the Fort Lauderdale suburb of Parkland. The building where most of the victims died will remain closed indefinitely, however.

Parents who had never accompanied their children to high school tagged along with their teens to offer moral support. Jeannine Gittens, 44, and a friend and fellow mother, had gone ahead of their sons to greet them as they came off the bus.

“We just wanted to make sure they know we are there and that they have our support,” said Gittens, who said her son Jevon, 16, and his friend had ridden the bus alone “because they wanted to make today feel as normal as possible.”

Freshman Nicholas Rodrigues, 15, said he decided to walk the mile (1.6 km) from his home in neighboring Coral Springs rather than ride his bicycle as usual because “wanted to think about things.”

Even as students went into the sprawling Douglas campus, supporters remained gathered outside.

“We feel for these kids so much,” said Beverly Turner, a 63-year-old youth pastor, who said she had two children who graduated from the school. “We’ve seen them grow up and us being there for them is the least we can do.”

Investigators have accused 19-year-old Nikolas Cruz, who had been kicked out of the school for disciplinary reasons, of carrying out his attack with a legally purchased AR-15 assault-style rifle. The shooting inflamed the nation’s long-running debate on gun rights as defined in the Second Amendment of the U.S. Constitution.

Debates over how to respond to the school shootings has seen in recent years erupted in Washington and at state capitals since the Feb. 14 massacre. They also pulled in corporate America, with gun retailer Dick’s Sporting Goods Inc (DKS.N) on Wednesday saying it would no longer sell assault-style rifles, the type of weapon used in four of the five deadliest mass shootings by a single gunman in U.S. history, as well as Parkland.

The Republican leaders of the U.S. Congress on Tuesday rejected new limits on guns after the attack, saying they would not raise the minimum age for gun buyers. The powerful National Rifle Association lobbied forcefully against any restrictions on gun sales, saying the infringe on the rights of law-abiding citizens.

President Donald Trump has suggested arming teachers, as well as reopening mental hospitals, as a way of combating school violence. Trump is scheduled to meet with lawmakers from both parties at the White House later on Wednesday to discuss proposals.

Teenage survivors of the carnage have launched an extraordinary student-led campaign to lobby lawmakers on Capitol Hill and the statehouse in Tallahassee for new restrictions on firearms.

Following the shooting, several large American companies said they were ending programs that offered discounts or other benefits to NRA members. Some have faced blowback, particularly in Georgia where a lawmaker said he would try to kill lucrative tax benefits at Atlanta-based Delta Air Lines (DAL.N) after it cut ties with the group.

Nonetheless, retailer Dick’s on Wednesday said it was taking action, including banning sales of guns at its stores to anyone under 21 and no longer selling high-capacity ammunition magazines. The company noted that it had sold a firearm to Cruz, although not the one used in the rampage.

“We have to help solve the problem that’s in front of us,” the company’s chief executive, Edward Stack, said in a statement. “Gun violence is an epidemic that’s taking the lives of too many people, including the brightest hope for the future of America – our kids.”

Dick’s had also removed assault-style weapons from its stories after the 2012 massacre of 26 children and educators at Sandy Hook Elementary School in Newtown, Connecticut, but later returned them to the sales floor.

Cruz was 18 when he bought the gun he is accused of using to attack the school. A Florida court on Wednesday scheduled a hearing to determine whether he has the assets to pay for his own defense.

The Broward County Sheriff’s Office and the Federal Bureau of Investigation have faced criticism that they failed to properly follow through on multiple tips warning that Cruz had the potential and capacity for deadly violence.

Sheriff Scott Israel has come under heavy criticism after disclosing that one of his armed deputies, assigned as the school resource officer, stayed outside of the building while it was under attack rather than enter and confront the gunman. The deputy has said he believed the gunman was outside.

The sheriff has acknowledged his office is examining reports from a neighboring police department that three more deputies who were present took cover outside the building with guns drawn rather than go into the school immediately.