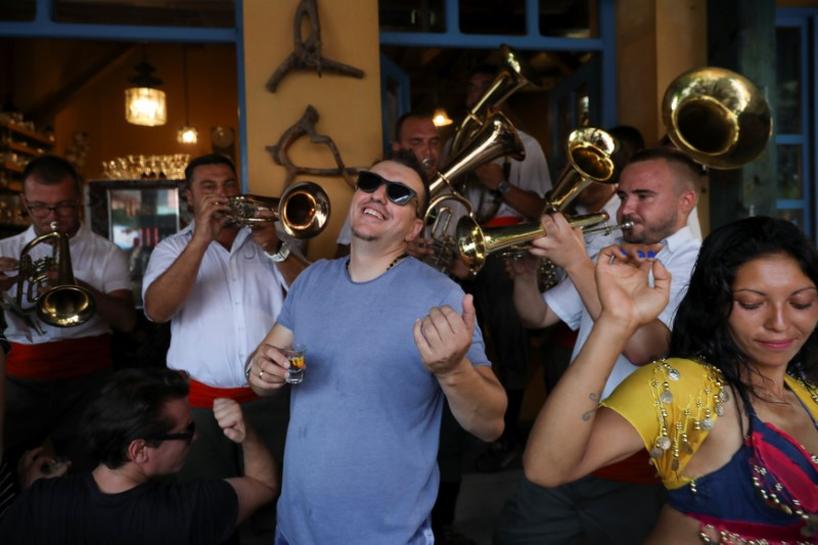 Guca, a normally sleepy town with only 3,700 people in the rolling hills of southwestern Serbia, is hosting the country’s biggest party, with 50 brass bands competing for the coveted Golden Trumpet.

Launched in 1961 with just four bands and only 2,500 visitors, Guca has since received more than 15 million people.

The “Dragacevo Trumpeters Assembly,” as the festival is officially called, now lures not only Serbians but tourists from around the world.

A woman dances on a table as a band plays during the 57h Brass Band Festival, in the village of Guca, Serbia August 11, 2017. Picture taken August 11, 2017.Marko Djurica

“One Serbian girl in Germany told me about it … and now I’m here, it’s great, I love it,” said Maria, a Bulgarian tourist in her 20s.

The music has a long tradition in Serbia – it goes back to a royal decree establishing a military brass band in 1831.

The bands, those competing for the prize and those weaving through dozens of tents teeming with guests eating, drinking and partying, make good money from tips.

Most visitors drink beer and plum brandy and eat barbecued meat or a local delicacy, seasoned spicy cabbage with three kinds of meat which simmers for hours in large clay pots.

In an attempt to avoid the serious road accidents which have marred the festival in the past, police have ordered all drivers along the two roads leading in and out of Guca to take a breathalyzer test.