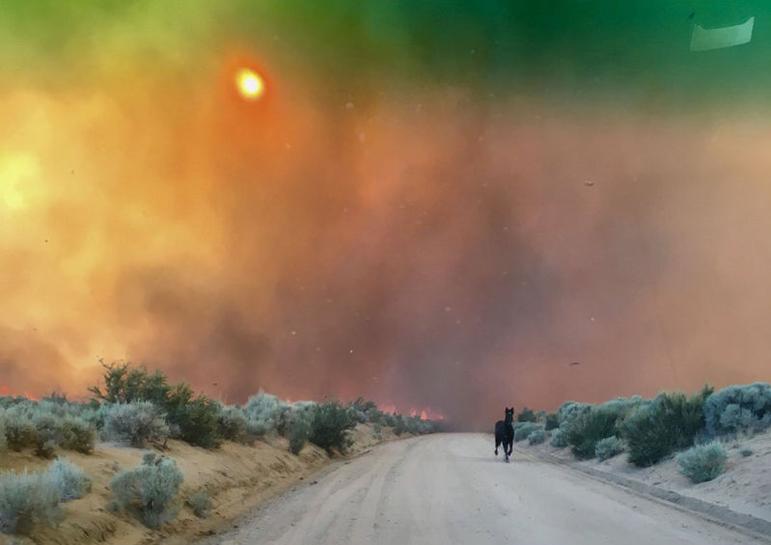 MARIPOSA, Calif. (Reuters) – The 2,000 residents of a small California town in the foothills flanking Yosemite National Park were ordered to evacuate on Tuesday as crews battled an out-of-control wildfire that has already destroyed eight structures.

Residents of tiny Mariposa, in the Sierra Nevada mountains southwest of Yosemite in central California, were ordered to flee after flames from the so-called Detwiler Fire jumped over Highway 140 and marched toward the community, threatening 1,500 structures.

“Fire activity continued to grow throughout the night due to ample fuel, and steep terrain,” the California Department of Forestry and Fire Protection (Cal Fire) said on its tracking website. “Today firefighters expect unfavorable weather conditions and aggressive fire behavior.”

A photograph posted on social media showed empty downtown streets as an orange and pink glow from the fire hovered on the horizon. Downtown Mariposa had its power cut off, according to one reporter on a Fox affiliate.

Cal Fire said utility lines supplying power to the national park were also in the path of the flames.

The Detwiler Fire, which broke out on Sunday afternoon and has since blackened 25,000 acres of forest land, was only about five percent contained as of Tuesday afternoon, according to Cal Fire, and posed a threat to several other small foothill communities.

A horse runs from burning grasslands of the Long Valley fire near Doyle, California. Crews battling dozens of wildfires across parts of the parched U.S. West will face tinderbox conditions that could stoke more blazes on Friday and through the weekend, forecasters said.

“The fire encroaches on culturally and historically sensitive areas,” Cal Fire said in a status report on Tuesday night.

The fire has forced the evacuation of about 5,000 residents in the area, the California Interagency Incident Management Team said in a tweet.

“I haven’t seen these conditions in a long time, it’s a wind-driven, slope-driven, fuel-driven fire,” Jerry Fernandez with Cal Fire told an ABC affiliate in Fresno.

Governor Jerry Brown declared a state of emergency for Mariposa County on Tuesday as the fire was approaching. The proclamation sends resources to the area.

The Detwiler was among more than three dozen major, out-of-control wildfires burning across the U.S. West as windy, dry conditions prompted authorities to issue evacuation orders and red flag warnings in California, Oregon and Nevada.

Flames have charred more than twice as much land in California so far in 2017 compared with the same time last year, according to Cal Fire.