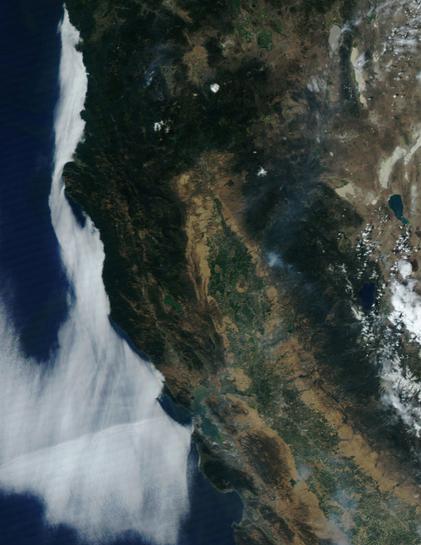 A fast-moving wildfire burned overnight through thousands more acres of steep terrain near California’s central coast, officials said on Sunday, as high temperatures and parched vegetation fueled dozens of blazes in the U.S. West and Southwest.

The Alamo Fire has engulfed about 23,900 acres in the area of the border between San Luis Obispo and Santa Barbara counties, a few miles from the city of Santa Maria, according to the California Department of Forestry and Fire Protection, or Cal Fire for short. That was up from 19,000 acres on Saturday evening.

About 10 percent of the fire had been contained, Cal Fire said.

On Saturday, hundreds of people were ordered to evacuate the remote canyons affected by the fire. No injuries have been reported. Hundreds of firefighters were trying to stop the fire from reaching wineries to the south and electric transmission lines to the southeast, Santa Barbara County officials said.

The Alamo Fire was one of about 50 large uncontained fires burning in western states, the National Weather Service said on Sunday morning.

A wave of scorching weather has hit California in recent days. On Saturday, a fire at an electrical power station in Los Angeles left 140,000 residents without power, after a second straight day marked by temperatures that exceeded 90 degrees (32 Celsius).

US stops short of branding Vietnam, Switzerland, Taiwan currency manipulators
Challenges and opportunities as Singapore targets becoming a sustainable tourism destination
‘I Will Treat The Chinese Consulate as My Husband’s Cemetery’
11 residents at Westlite Woodlands dormitory test positive for COVID-19
Bangladesh cracks down on Islamist hardliners after India PM protests