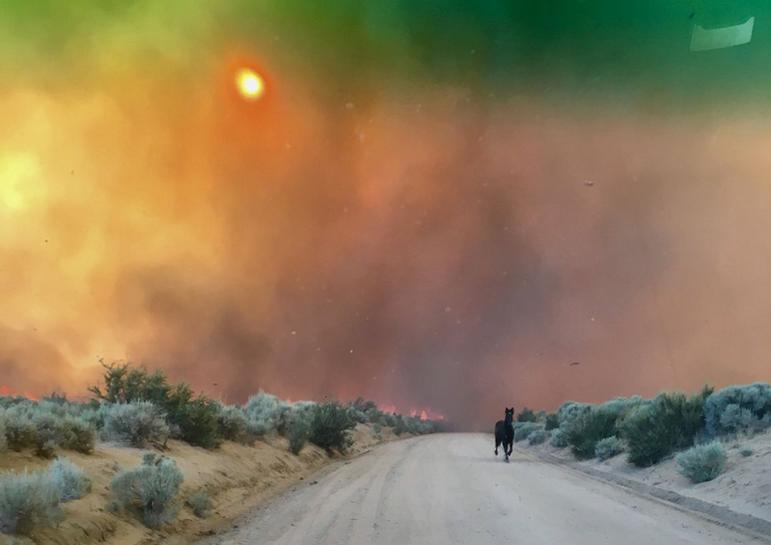 (Reuters) – More than 800,000 residents in the U.S. West were told to be ready to evacuate on Tuesday as windy, dry conditions threatened to stoke wildfires, forecasters said.

A red flag warning was issued for southern Oregon, northern California and northern Nevada as 35 mph (55 kph) wind gusts and humidity hovering around 10 percent were seen, the National Weather Service said in an advisory.

“Strong winds could rapidly push fire into close proximity of local communities Tuesday afternoon and evening. Heed any evacuation orders. React quickly, you may not have much time to leave,” the service said.

More than a half a dozen fires have started up over the last two days in California including the Detwiler Fire, which forced some residents in Mariposa County to evacuate on Monday.

A horse runs from burning grasslands of the Long Valley fire near Doyle, California. Crews battling dozens of wildfires across parts of the parched U.S. West will face tinderbox conditions that could stoke more blazes on Friday and through the weekend, forecasters said.

The fire destroyed one structure and threatened 300 more after swelling to 11,200 acres since it began burning brush and tall grass on Sunday afternoon. Five percent of the fire was contained as of Monday night, the Cal Fire website reported.

Ten new large blazes ignited on Monday as a total of 35 wildfires burned across the U.S. West, the National Interagency Coordination Center said.

Flames have charred more than twice as much land in California so far in 2017 compared with the same time last year, according to Cal Fire.

(This story has been refiled to delete extraneous word in headline.)

Reporting by Brendan O’Brien in Milwaukee; Editing by Richard Balmforth