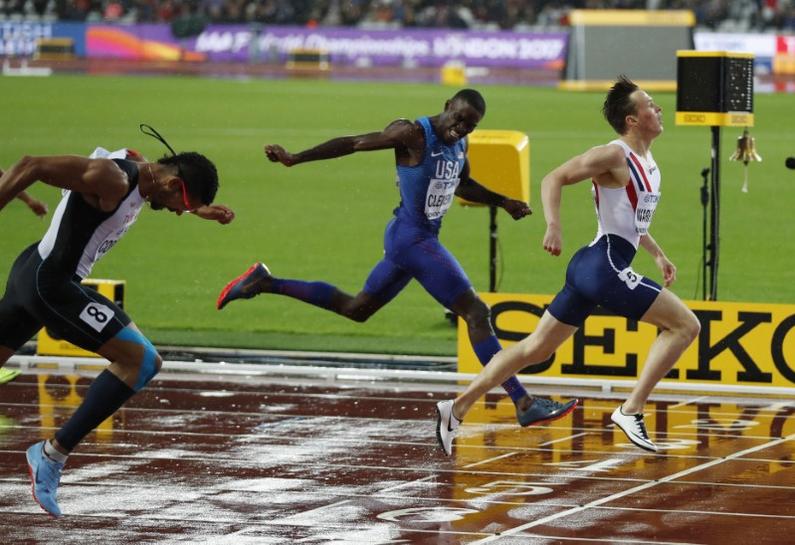 LONDON (Reuters) – Norway’s Karsten Warholm announced himself as one of the sport’s brightest new powerhouses as he recorded a magnificent gun-to-line triumph to lift the world 400 meters hurdles title in the pouring rain on Wednesday.

The 21-year-old former decathlete demonstrated all the strength he has acquired from competing in the multi-event discipline as he led from the first hurdle and held off his pursuers on the home straight to win in 48.35 seconds.

Still effectively a novice at the “man-killer” event, the youngster clasped his face in disbelief as it dawned that he had beaten Turkey’s European champion Yasmani Copello (48.49) into the silver medal position.

Warholm also spoiled Olympic champion and favorite Kerron Clement’s dream of becoming the first man to win three world titles at the discipline as the 31-year-old American had to settle for bronze in 48.52.

It was the first track victory at any World Championships by a Norwegian since Ingrid Kristiansen’s 10,000 meters triumph in Rome in 1987 and Warholm’s smile of incredulity said it all.

“I truly don’t believe it. I’ve worked so hard for this but I don’t know what I’ve done. This is an amazing feeling,” he told the 55,000-strong crowd after somebody gave him a viking helmet to wear on his lap of honor.

“I found the helmet in the crowd and it just felt right. I thought it was suitable for the occasion. It is cold and wet like Norway so I guess it suited me!”

Warholm had been touted as one of the bright new faces of global athletics all year, especially after sending his compatriots into raptures at his home Bislett Games in Oslo in June when he triumphed, breaking the national record in 48.25 seconds.

That he should finish just a 10th of a second outside that mark on a wretched night with the rain tumbling down and puddles on the track suggests it was a superior run.

“I’m world champion, that’s crazy. A lot of hard work and dedication has got me here so thank you to my coach (Arve Hatloy) for getting me in a position to challenge for a world title.”

Warholm, world champion in the octathlon just three years ago, decided on a simple tactic from the gun, taking out the pace as hard as he could and holding on for dear life.

It was a joyous ride, which only really looked as if it might be upset in the run-in by Qatar’s little-known Abderrahaman Samba who was timing his run well until hitting the last barrier.

“I got out well and managed to hold it really well,” said Warholm. “I’m so proud of my performance. I hope people back in Norway are as happy as I am.

“Decathlon gave me a really good base coming into the hurdles. All the credit goes to my coach for making me a world class hurdler.”

What had looked almost certainly like a medal-winning run turned into a seventh-place finish for Samba as Turkey’s Cuban-born Copello cashed in to finish second.

Clement had said how much he enjoyed the challenge of the youngsters but his bid faltered as he stuttered before the last.

“My legs just weren’t there off the last hurdle and that cost me the gold. You can see I came off it pretty badly. On another day I would have won but I’m happy to add another medal,” Clement said.

He had, though, only praise for the man who looks like the future of the event.

“He is a talent and showed that today,” Clement said.