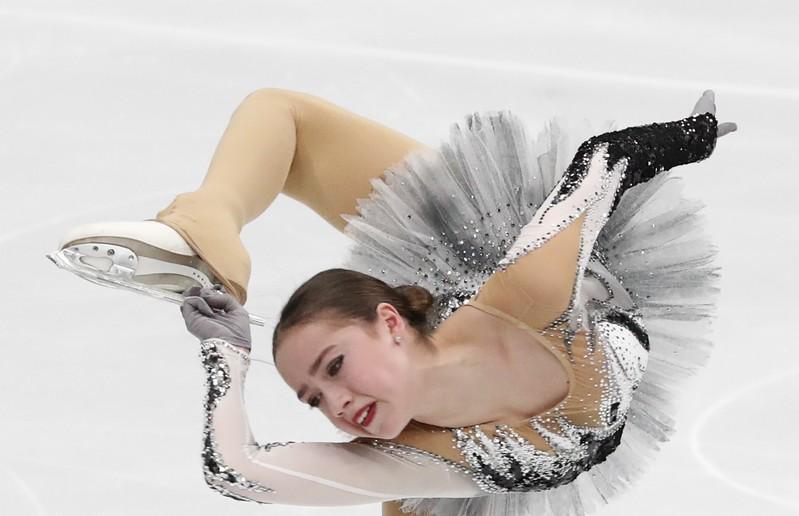 MOSCOW (Reuters) – Twice world champion Evgenia Medvedeva was upstaged by Russian compatriot Alina Zagitova in the short program at the European championships on Thursday as the Olympic gold medal favorite made her comeback following a two-month injury layoff.

The 15-year-old Zagitova, who won the Grand Prix Final last month while her training partner Medvedeva was sidelined with a fractured foot, was rewarded with a score of 80.27 points for her short program which featured a cleanly-executed triple Lutz-triple loop combination.

Medvedeva, who has not lost a competition for more than two years, finished second with 78.57 points after stepping out of her double Axel.

“I‘m not pleased with my performance today but I still have time to make adjustments,” said Medvedeva, who grimaced at the end of her skate.

“My foot recovered very quickly. I never thought I would say this but I am glad that I have felt that this is my sport. I missed the competitions and training. It was a difficult period.”

Trailing Zagitova by only 1.7 point, the 18-year-old Medvedeva is still in the running to secure a third consecutive European title following Saturday’s free skate.

Medvedeva topped the podium at last year’s Grand Prix events in Moscow and Osaka but missed the Grand Prix Final because of a cracked bone in her right foot.

The injury also prevented her from competing at last month’s Russian national championships.

Italy’s Carolina Kostner, a five-times European champion, finished third with 78.30 points despite a slight error on her triple toeloop.

“I am very happy with my performance,” Kostner told a news conference. “I felt grounded and serene.”